Give cows a post-calving boost with Reviva

Help your cows to achieve a smooth transition into lactation.

It is crucial to minimise the effects of these changes to give the cow a good start to lactation, maintain body condition score and optimise herd performance.

‘Reviva’ from Specialist Nutrition is a post-calving energy drink for reviving cows after calving and helps them to achieve a smooth transition into lactation. It not only rehydrates but has extra benefits as discussed below.

After calving, there is a huge calcium demand as colostrum and milk production commences. Blood calcium levels fall rapidly, and cows try to compensate by releasing calcium from their bones and increasing uptake of calcium from the post-calving diet. If demand is not met, milk fever will result.

There are several methods of milk fever prevention. Reviva contains as much calcium as a bolus and is very bioavailable, making it easy for the cow to digest and absorb. A published study showed cows that received calcium injections had a short-lasting spike in blood calcium, which quickly fell below optimal levels again. However, cows that received Reviva had much more consistent blood calcium levels due to Reviva’s very sustained release (see graph). Reviva provides a prevention strategy and helps to keep blood calcium at normal levels. 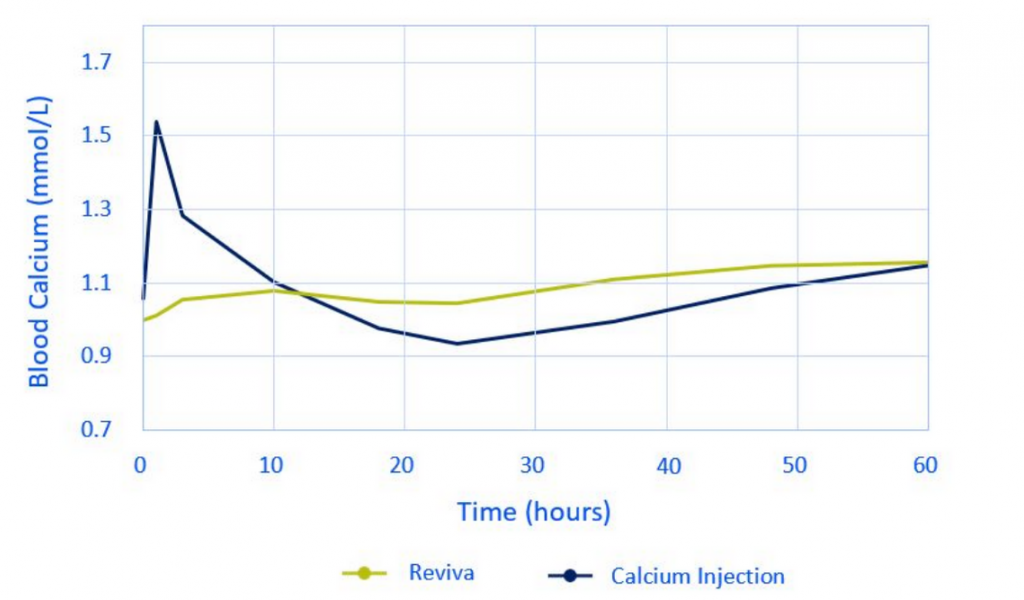 Calving is a stressful experience and causes cows to lose a lot of water (up to 50 litres). The cow will stop eating and drinking during the last 8 hours before calving. This can leave cows with very low activity levels and a reluctance to eat and drink after calving.

Reviva helps to replace water and contains electrolytes to aid rehydration. It is warm, very palatable and encourages cows to drink. Studies have shown over 94% of cows are very eager to drink Reviva and some farmers have even reported 100% of cows accepting Reviva.

Reviva contains lots of sugars to give cows a boost of energy. Increasing energy supply after calving aids a quicker recovery and increases cow activity, which encourages them to eat and drink. Increased energy levels help to support the start of the cow’s lactation and reduce the risk of negative energy balance.

The significant metabolic changes, and dehydration that occurs around calving result in a vast reduction in DMI. At the beginning of lactation, cows will be in negative energy balance. It is important to achieve as much DMI as possible to ensure a good supply of energy and reduce the risk of ketosis and other associated diseases. Another trial investigated the difference between offering cows clean, fresh drinking water, or 20 litres of Reviva immediately after calving. The cows who received Reviva had 1kg greater DMI than the group who received only drinking water.

Reviva is effective at rehydrating cows, while providing additional benefits of improving blood calcium levels, energy levels and DMI. Ensuring a well-managed transition from calving into lactation helps to reduce the need for costly treatments and gives cows a great start.

How to Manage Butterfat Depression