Success Stories
“Since introducing Eornasyrup I’ve seen a reduction in body condition fluctuations, along with an increase in milk production.” 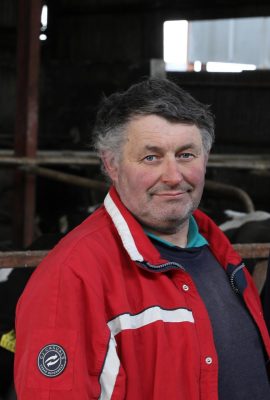 Maintaining milk output throughout the winter and balancing his herds diet into the spring, while controlling his feed costs, were three key challenges that dairy farmer James Nally wanted to overcome.

Faced with the prospect of growing a profitable dairy business in a post quota, but variable milk price era, James worked with Specialist Nutrition to secure an alternative source of feed that would deliver on the potential he knew existed in his farming enterprise.

Farming in Glasson outside Athlone, James has grown his British Friesian herd from 100 to 200 cows, along with farming 60 replacement heifers and 120 beef cattle, which he sells as weanlings.

Using only baled silage, which can be variable quality, James struggled to maintain a consistent diet and the impact on milk output was noticeable. To address this, and in an effort to maximise production, while controlling costs throughout the winter milking period, James introduced Eornasyrup into his herd's diet.

Eornasyrup is a highly palatable feed, which is favourable when dealing with variable quality silage bales. This, along the fact that it is high in protein, provides a very digestible feed that compliments James’s low protein grass silage. As a result, James has been able to maintain his milk quality, without having to supplement his feeding programme with expensive feeds. All while growing milk yields substantially from 5,000kgs to 6,000 kgs.

James added “Before I started to work with Specialist Nutrition I was not getting the milk production I knew I could achieve. While trying to maintain the herd's body condition, my system had become too reliant on course rations fed through the diet feeder and nuts fed through the milking parlour. This was costly and was eating into margin, especially during poorer milk price years. Since introducing Eornasyrup I’ve seen a reduction in body condition fluctuations, along with an increase in milk production.”

In the winter of 2017/2018 James also started adding Vistacell AB yeast to his herd's diet in order to address ruminal acidosis issues in his milking cows, which were identified by Nutritionist Nigel Condell.

This was evident through the presence of ‘cud balls’ in the cubicles, along with very loose cow dung, and a depression of butterfat content. Vistacell AB yeast was introduced at a rate of 100 grams/cow/ day; as a result, James has seen an increase of milk protein from 3.35% to 3.54%, while Butterfat has increased from 4.5 to 4.7%.

As focus turns to grassland utilisation during the spring period, Eornasyrup has been replaced in the diet by Liquigold as a complimentary feed to high protein, low dry matter, spring grass.

By helping to ensure cows eat their energy requirements, it also plays an important role in reducing body condition loss after calving. It fits perfectly into James’s feeding programme, particularly coming out of a winter indoor feeding system.”

James added “The cows just love it – it’s like putting sugar on porridge for them.” During his time working with Specialist Nutrition, James has seen a significant increase in milk solids, fewer lameness issues meaning cows last longer in the herd and fluctuations in body condition scores have also been reduced.

In order to build a sustainable business and manage risks to his farm output and profitability, James knew he needed a reliable, alternative source of feed that complimented his grass-based system. By investing in a second-hand tank for liquid storage and using Liquid Feeds throughout the year, James has been able to achieve this.

Tank costs were quickly recouped through a 20% increase in milk output and a 5% reduction in winter feed costs.

This approach has enabled James to grow his farming enterprise in a profitable and sustainable way; while giving him a reliable feeding programme; even when faced with the challenges of variable land and weather conditions.

James concluded: “Introducing Liquid Feeds into my diet has really revolutionised my feeding programme. After an initial investment in the tank, I’ve quickly been rewarded with more money in my pocket at the end of the year and the peace of mind in knowing I have a reliable source of feed to balance my animals diet.”

Since working with Specialist Nutrition I’ve experienced huge improvements in milk production and cow fertility. I credit this to the balanced diet I’ve been able to achieve across all seasons, and Liquid Feeds in particular has allowed me to get the most out of the cows I have, while complimenting my grazing system. I’m very happy with the results. ― James Nally
Copyright ©2022 Specialist Nutrition | An Arvum Group Company